Claire Kellogg and her husband Bruce Betzer have lived in Beavercreek for over 40 years. In the 1970s they were living in Milwaukie, Oregon, and hoping to find about five acres of rural land nearby. The reason? To “get back to the earth, and raise our own food and children in the country,” says Claire. They ended up purchasing a 10 acre woodland on Upper Highland Road in the fall of 1976, and began building their house the following year.

Claire loves the geography of Beavercreek: the “ups and downs of the hills and the flow of the lines of tree tops.” At the time, Beavercreek was a lot less populated – there was no bypass; there was a farm where Albertsons Berry Hill is today. Claire jokes about having to drive from Milwaukie to Upper Highland for that entire year, their old truck breaking down along the way. But they persisted. The first order of business was to plant 12 blueberry bushes since they take so long to establish.

Bruce chose a Victorian design from historic house plans from the Portland Historical Society. In the 1970s this style of house was not as popular as it was today, so he researched and sketched out the drawings himself and had an architect friend of theirs review everything. Their unique home includes a salvaged from door that has an etching of the battleship USS Maine. They spent the next year completing the home and moved inside in 1978. More recent homestead projects included new kitchen flooring, a new planting of tree saplings to keep their forest healthy, and of course, general maintenance (which never seems to cease). 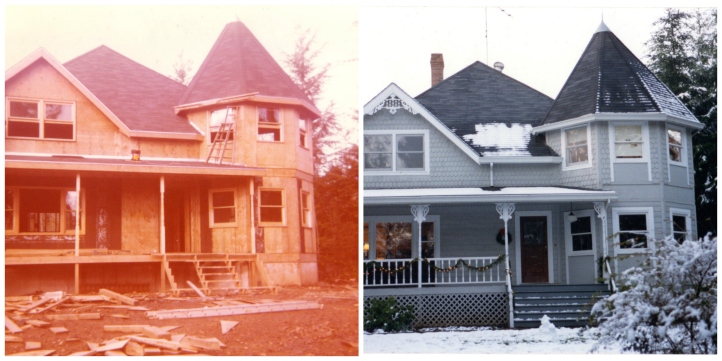 Their woodland is composed of fir, alder, and cedar – typical for our area. Over the years they attempted a number of plantings including fruit and nut trees. “We never could get them to grow,” Claire says. “It’s hard to enjoy the lifestyle of living in the forest while also having a successful garden. It’s just too shady. But it’s still worth it.” Her suggestion for a successful garden in Beavercreek is “deer fencing and raised beds with metal hardware ‘cloth’ on the bottom of the beds.”

In 1981 Bruce planted maple trees along their driveway. Each year they would take pictures of Bruce and the children next to the trees for decades – watching both kids and trees grow up together.

As reference librarian for 35 years, Claire is still very supportive of the library having recently helped the Oregon City Library Foundation as it developed its new building. She participates in a range of activities including the Oregon City Library Book Group, Hamlet of Beavercreek meetings, the Flea Market committee, Beavercreek Couples Book Group (most recent book: H is for Hawk by Helen Macdonald), and the Skip-a-Week Quilt Club. Quilting is one of her favorite hobbies (along with vegetable gardening) and in fact, the quilt club will have a table at the Beavercreek Flea Market on July 15, and will host a show on July 21-22 in Estacada.

What motivates her is a desire to spend her time with intention. Claire says, “There are never enough hours in a day, so every morning I have something meaningful to get going on. I never forget how fortunate I am to have such a beautiful place to live.” She loves being part of a Hamlet and encourages residents to get to know each other more as individuals, and attend the Hamlet meetings to share ideas.

Meet Claire at a future Hamlet meeting or the upcoming Flea Market event. We hope to see you all there!